After our not so good sightseeing tour on Tram 28 we decided today to visit the Castile St Jorge which sits atop of one of Lisbon’s seven hills, luckily Tram 12 passed our apartments which like Tram 28 goes to the Castile, and luckily for us just as we left the apartment one had just arrived,the Castile dates back to the 2nd century BC. It sits atop of one of Lisbon’s hills with magnificent views over the city and the sea, and can be seen standing proud from most parts of the city below. You can walk around its ramparts and explore the many courtyards inside also inside the Castile there are some resident peacocks. Now I’m not sure if it was mating season or the girls good looks but the male birds were showing off their magnificent plumage, a great spectacle indeed. Another must see is the Camera Obscura which is housed in the towers. “Camera obscura, an optical system of lenses and mirrors, which provides a detailed 360º view of the city in real-time, including its monuments, most emblematic areas, the river  and the bustle of Lisbon itself.”

Once you leave the Castile the small narrow streets which surround the castle are also worth spending some time exploring, with their  quaint little shops and small restaurants and bars. After a couple of hours visiting the Castile we made our way down the hill to take a look at Lisbon’s cathedral which was built In 1147 and has had many transitions since, it also has survived many of Lisbon’s earthquakes, worth a look but not as impressive as some of the cathedrals I have seen. I suppose I am spoilt living in Lincoln with our magnificent cathedral. As it was soon time to be thinking about dinner we decided to head back to the area our apartment was in “Baxia Chiado” and look for a restaurant, walking about the day before we liked the look of a small little family restaurant close by us called “Adega de S Roque” in. Rue da Misericòrdia, we were attracted by its intimacy and of course it’s menu,a restaurant I would certainly recommend, also don’t be put off by the many football scarves attached to the ceiling apparently it is a legacy of the previous owner, there are no big tv’s showing football, and in my opinion the huge splash of colour adds to the quaint decor.

After leaving the restaurant we decide to take a walk back to our apartment along Rue de Norte which is one of the many narrow streets in the Barri Alto district which is famous for its many small clubs, pubs and restaurants and have a nightcap. We liked the look of a small bar called Alface Hall, where some musicians were setting up their instruments also another thing that attracted us was the fact that happy hour was on so we wandered in. Luckily for us it was quite empty so we found some seats close to the stage and ordered our drinks. The bar soon started to fill up, the music started playing, which incidentally was brilliant, so from what was supposed to be a nightcap turned into a very late night, of excellent music, plenty of belly laughs and drink a great night was had by all “we did pay the price the next day but it was worth it”. 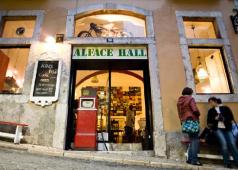