After a short flight from Mumbai we have arrived here in Jaipur in the Rajasthan region of India. On departing from the airport on the drive to our hotel the roads seemed much quieter and more serene the housing was quite upmarket for Indian standards this all seemed quite refreshing coming from the hustle and bustle of Mumbai, but this was the calm before the storm and very short lived indeed as once we had reached the boundaries of the city centre our peace was shattered, more manic driving, continual honking of horns in fact it seemed worse in some ways than Mumbai also there was a lot more Tuk Tuk’s jockeying for position, adding to the congestion, I noticed in Mumbai in fact we did not see very many Tuk Tuk’s at all, don’t know whether the government has reduced the numbers to ease congestion? Our first port of call after checking in at our hotel the Om Niswas was to visit the old part of Jaipur the pink city, so called because all the buildings inside the city walls are painted pink (well in fact terracotta not pink, don’t ask). When we arrived we discovered that there was a religious festival in full swing, the place was alive with chanting, drum banging and locals pulling elaborately decorated carts around the streets. Quite a spectacle also very noisy. As we wandered around the streets it reminded me once again how industrious the Indian people are selling anything and everything to make a living, from the street kitchens, cooking up the most delicious looking meals from very basic cooking utensils, people repairing motor scooters just on the side of the road, fruit and vegetable carts, it seems basically anything.. So after our initial reconnoiter of the area it was back to the relative peace and quite of the hotel ready for our first full day.
Jaipur Day 2
On our way back from the city we met a very nice Tuk Tuk driver, asked us “where were we from, how long are we staying, what do we want to see”, the usual banter, and as he seemed a nice chap we negotiated a price to hire his services for the next day’s sight seeing, 800 Inr about £8, which is pretty good for a full day. Our first stop was the Pink Palace “or as the locals call it the city palace, which is situated in the centre of the walled city it is the former home of the Maharajah of Jaipur Jai Singh, it’s worth getting a guide to show you around, but only opt for the official ones, they have a badge denoting this also should carry a licence. Next stop was Hawa Mahal the palace of the winds its a magnificent structure from the inside but amazing from the out.

Our next stop was to visit the Amber fort known locally as the Amer Fort, this is situated some 11 km outside the city and is well worth the visit, also take an official guide, you will find these at the ticket booth at the top of the hill not at the bottom. We found a great guide so knowledgable and helpful his name was ? We found so much about the place, he spoke good English and had a great sense of humour. If you click on any of the links to the attractions we  visited you can find out in more in detail about the places we visited. Also I will write more on Jaipur city in a later post as Internet especially wifi is very difficult here in India and is very slow 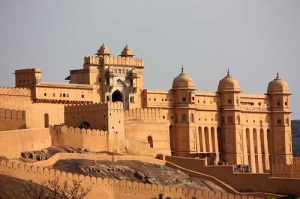 Tomorrow we move on to Ranthambhor National Park with the hope of seeing a tiger in its natural habitat.