Another busy day lies ahead, it was up and atom as we had an appointment at the Parliament building at 10am. Now this seem all very grand but I was reading someone’s else’s travel blog on Tripadvisor who recommended taking the time to visit, he also suggested emailing them in advance to book to avoid the queues which I duly did. I received a very nice reply on officially headed paper with our appointment date and time so we were all set. Now in the blog that I read the guy stated that by having the official letter you avoid the queues this is true in a sense, let me try to explain. If you arrive via the metro you need to walk around to the front of the building, you will then see possibly a long queue this is for people without tickets and even though you have your official letter you still need a ticket, but don’t panic at the size of the queue just walk to the front of the queue show the official your letter and he will direct you straight to the ticket office thus avoiding the queue. There is an admission charge for anyone who lives outside the EU but for EU citizens its free. Tip don’t forget to take some sort of id i.e. driving licence, passport id card etc to prove you are from the EU. After you pass through the security checks you will be confronted by the grand staircase in a word spectacular 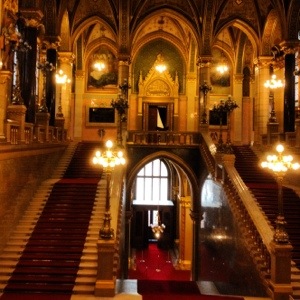 you will then take the tour which lasts approx 45 minutes well worth taking the time to do during your stay.
Next it was a spot of brunch, we followed the advice in our lonely planet guide and went into a little cafe/restaurant called Pick which is right next to the metro exit. It’s a Deli downstairs with the restaurant above, they serve some amazing traditional Hungarian dishes at a very cheap price.
Next stop Hero’s Square which is at the end of Andrassy Ave (which incidentally is a unesco heritage site) a beautiful tree lined ave with magnificent buildings either side. As hero’s square is at the opposite end of where we were we decided to take the metro. Whilst on the subject of the metro it is very easy to navigate and cheap to use. We purchased a group ticket which lasts for 24 hours (their are other options available i.e. daily 48 & 72 hour options) which entitles you to ride the Metro, Trams, Trolly buses & HEV (Overland rail as far as city limits) for our ticket it was a very reasonable price of 3100 huf about £9 for three people. We arrived at Hero’s Square or Hösök tere a magnificent monument to Hero’s past. Now Hero’s square is right on the edge of the city park, I likened it to a mini Hyde park (London) or central park (New York) with a many attractions to see including a zoo and home to the Szechenyi baths one of the many thermal baths dotted around Budapest we only went into the entrance as we did not have enough time to take a dip.
After about an hour in the park it was back onto the Metro for our next port of call the House of Terror the former HQ of the dreaded AVH secret police, the house contains many sobering artefacts and photographs from the decades of fascist’s regime. The museum is very well laid out and well put together a must see if only to remind us of the dreadful atrocities of the past and to live in the hope it will never happen again so relatively near to home. Top tip if you visit the museum make sure you pay for the English audio guide, we did not know this was available until we were just about to exit as we were not informed at the ticket desk, I say this as there are very few videos or exhibits in English so at times it was difficult to understand some of the exhibits.
Then to finish of a great day in the eve we again took to the metro to the Buda side of the river and got out at Batthyany metro station where you will find some stunning views of the parliament building and the chain bridge lit up a must see in my book

I will be placing a lot more pictures taken with my professional camera on my Flickr page, more details later